SuperSport United recorded their first win in four games as Bradley Grobler struck late to clinch a 1-0 victory over Stellenbosch at the Danie Craven Stadium on Wednesday. 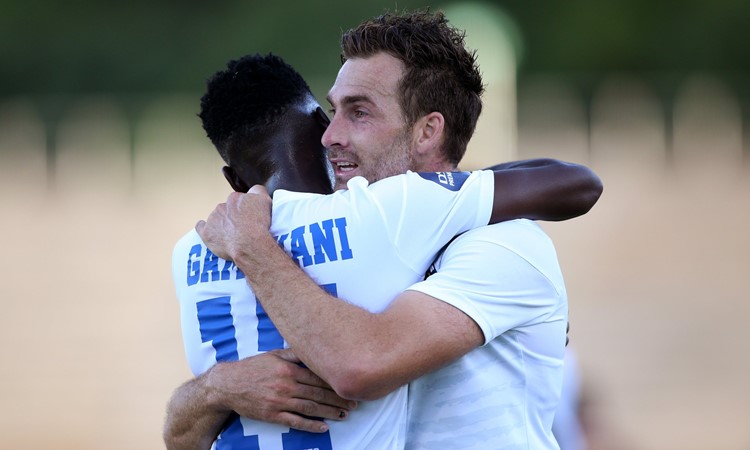 SuperSport United recorded their first win in four games as Bradley Grobler struck late to clinch a 1-0 victory over Stellenbosch at the Danie Craven Stadium on Wednesday.

Kaitano Tembo's side looked more threatening throughout and finally got their reward at the death when Grobler pounced to register his first goal of the season.

SuperSport moved up to third place in the table, with the Cape Winelands club dropping to sixth after seeing their winless run stretch to six matches.

The two teams came into the match separated by just three points and one place in the table, and without a win in their last three league encounters.

Windy conditions made life difficult on the pitch as both sets of players struggled to get their passing game going in the opening stages.

The visitors had the first sniff at goal with just two minutes on the clock though, when Ghampani Lungu squeezed a shot wide from a tight angle.

Stellies had to wait until the 16th minute for their first attempt, with Athenkosi Mcaba drawing a comfortable save out of Ronwen Williams from a corner.

After a scrappy period ensued, Matsatsantsa should perhaps have taken the lead on 27 minutes when Kegan Johannes met Jamie Webber's free-kick, but could only steer his header wide of the mark.

The Tshwane outfit continued to threaten as the first half drew to a close, with Webber testing Sage Stephens from a direct free-kick in the 35th minute before he lashed an effort wide from range moments later after being picked out by Iqraam Rayners.

But the final chance of the half fell to the hosts as Ashley Du Preez forced Williams into a low save on 39 minutes after Antonio Van Wyk's initial shot had deflected into his path.

Rayners rattled the crossbar with a header just three minutes after the restart, but the referee blew him up for a foul as the forward rose to meet a cross on the right from Moses Waiswa.

Du Preez then had a golden opportunity to open the scoring when Waseem Isaacs played him clean through on goal in the 62nd minute, although Williams was alert to the danger and rushed off his line to deny the striker.

Webber looked to catch Stephens off his line with an audacious effort from inside his own half just five minutes later and the Stellenbosch keeper was relieved to see the ball fly wide of the target.

Stephens made a routine save from Lungu's deflected strike from the edge of the area on 72 minutes, while at the other end Junior Mendieta was unable to steer Du Preez's low cross on target two minutes later.

SuperSport created numerous chances in the closing stages as they went in search of all three points, with Thatayaone Ditlhokwe directing a header over the bar from a corner in the 76th minute before Grobler volleyed wide moments later after being teed up by Thamsanqa Gabuza.

Stephens was called into action to keep out Lungu's snap shot at his near post on 88 minutes, but he was eventually beaten soon afterwards as Grobler slotted home from close range to snatch victory.