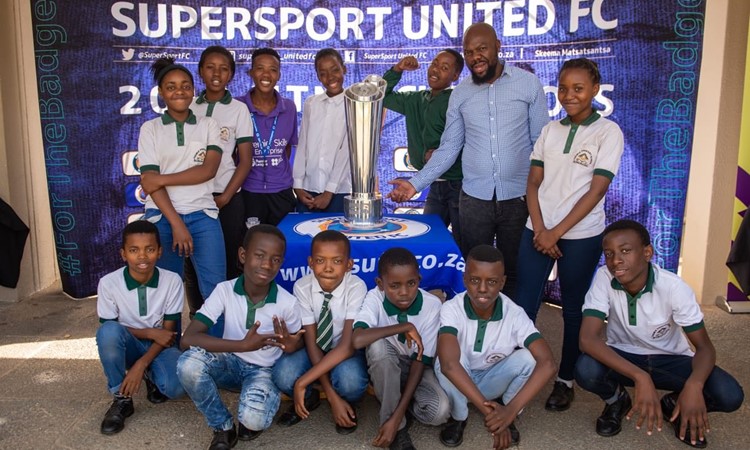 There were two schools from Tshwane (Atteridgeville and Mamelodi East) and one from Johannesburg.

Dr WF Nkomo from Atteridgeville, Zakhele Primary School of Mamelodi East and Parkhurst all had a fantastic experience of how a professional Football Club is run.

As the learners arrived, they received a warm welcome by the Matsatsantsa staff members while the team was busy on the training fields with the morning session prior to their league match against Black Leopards in Atteridgeville this coming Friday.

After the training session, learners, who were accompanied by their teachers and local coaches, were first addressed by club skipper Dean Furman who asked his teammates to each introduce themselves.

The visitors asked a lot of questions regarding the aspects of the game and the importance of a good working relationship between coaches and players.

From the training grounds they were then taken to the provisional auditorium for another activation with the office staff members and the club Physiotherapist Bafana Sihlali.

The intensive discussion was the sharing of knowledge, job opportunities, motivational talks and how learners, educators and coaches can build their own enterprises using football as a tool.  Most of all, the basic principles of how to run a professional football club by club head of operations and marketing manager.

After the activation the visitors toured the Laundry room, facility technical team offices and dining room.

At the end of the proceedings both leaners, educators and amateur coaches were given attendance packs and were also served with some refreshments during lunchtime.

The event was organised by Forward zone in partnership with, Johannesburg Premier Skills Enterprise and SuperSport United Football Club.