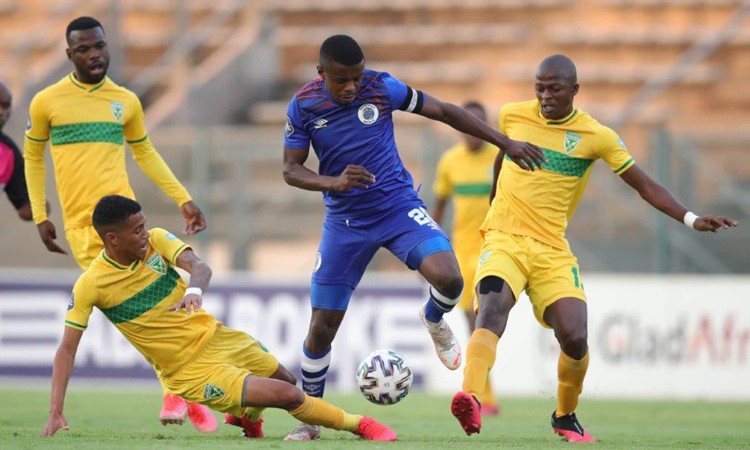 The match was held at the Lucas Moripe Stadium in Tshwane.

Matsatsantsa were without their regular goalkeeper and skipper Ronwen Williams who is out injured, and Teboho Mokoena was the captain of the squad in his absence.

Also, goalkeeper George Chigova debuted for United in the absence of Williams.

In the 9th minute, Sipho Mbule’s first attempt was blocked away by the Arrows keeper Mlungwana.

Visitors Arrows netted in the 21st minute of the game through Nduduzo Sibiya after United defender Luke Fleurs mistimed his clearance with his head and the ball reached Sibiya who gave Chigova no chance to deal with the ball after making a good run into the box.

United fought for an equalizer as Moses Waiswa’s long range effort was tipped over the posts by the Arrows keeper to a cornerkick in the 33rd minute.

The score was 1-0 to Arrows at interval.

In the 50th minute Jamie Webber’s shot was cleared by Sibisi after a brilliant cross on the left by Onismor Bhasera.

As Matsatsantsa were looking to level matters, coach Kaitano Tembo made double substitutions in the 54th minute when Bhasera made way for Kuda Mahachi whereas Evans Rusike came off the bench for Waiswa.

It was Webber again in the 59th minute as his tight-angle shot on the right was cleared to a cornerkick after receiving a superb delivery from Mbule.

In the 65th minute, Tembo brought some more fresh legs as the DRC international Guily Manziba came on for Webber.

United mentor made his final substitution in the 70th minute as right back Siyabonga Nhlapo made way for Keenan Phillips.

In the 73rd minute United initiated a superb move in the middle of the park before captain Mokoena released an accurate pass out wide to Manziba who set up Rayners but his close range shot was blocked by the Arrows keeper.

SuperSport United kept on pushing from all angles for an equalizer but it was not meant to be.