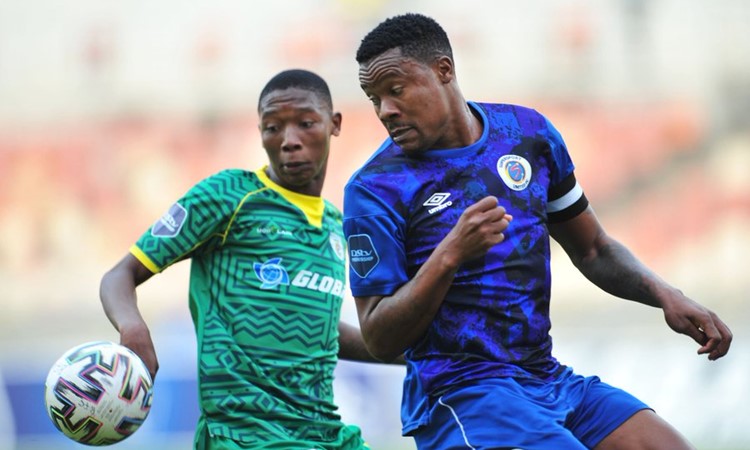 The match was played at the Peter Mokaba Stadium in Polokwane.

In the 11th minute keeper Boalefa Pule pulled a save from a tight angle on the right from Sekela Sithole.

The home side made their intentions clear as they came back again in the 20th minute but missed another chance after hitting the woodwork.

Matsatsantsa conceded a penalty in the 23rd minute as the ball hit Keenan Phillips’ arm from a free-kick.

The Baroka skipper Bonginkosi Makume converted from the spot-kick to make the score 1-0.

Captain Makume stood up again in the 28th minute as he completed his brace.

In the 32nd minute Selaelo Rasebotja made way for Thalente Mbatha who made his 9th appearance.

On the stroke of halftime Nhlapo conceded a free-kick on the edge of the box but Baroka’s Chauke hit the United wall.

The halftime score was 2-0 to Baroka.

At the beginning of the second half Matsatsantsa made their second susbstitution as Jamie Webber was replaced by Moses Ndhondhi.

Matsatsantsa kept on pushing for a goal but Baroka, who fought for their lives made it hard for the visitors who made their third substitution in the 70th minute as 19-year-old Thapelo Maseko made way for Aubrey Ngoma who made his 8th appearance,

In the 74th minute striker Evidence Makgopa netted Baroka’s third goal as Mbatha gave chase but failed to intercept the ball that was laid to Makgopa who easily tapped in.

In the 77th minute veteran Onismor Bhasera was cautioned after a rough tackle to Baroka player on the sideline.

In the 81st minute substitute Ngoma netted from a brilliant free-kick with his left foot, after Gamphani Lungu was brought down just outside the box.

In the 90+ minute Sifiso Ngobeni came off the bench for Bhasera.

The final score was 3-1 to Baroka.