SuperSport United Reserve side took the lead inside the opening five minutes against Mamelodi Sundowns in the Tshwane derby in their opening match of the 2021-2022 DStv Diski Challenge season on Saturday afternoon. 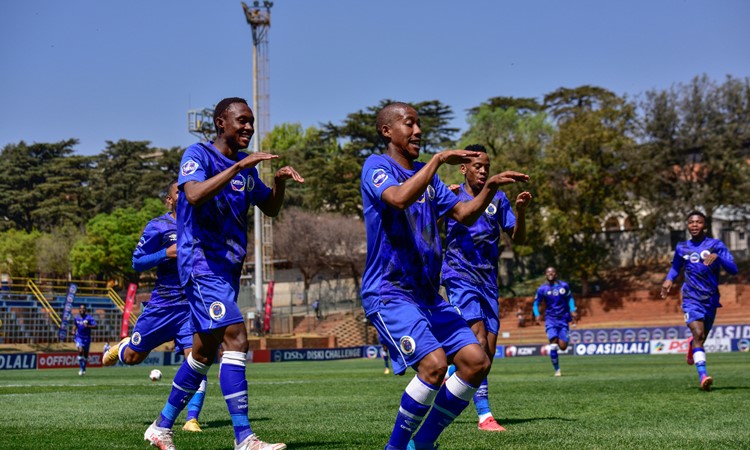 SuperSport United Reserve side took the lead inside the opening five minutes against Mamelodi Sundowns in the Tshwane derby in their opening match of the 2021-2022 DStv Diski Challenge season on Saturday afternoon.

The match was held at the Wits Stadium in Braamfontein, Johannesburg.

This after Selaelo Rasebotja’s killer pass to Oswin Appollis who whipped in a grass-cutter on the right to Sibusiso Maziko who tapped in with ease.

The score was 1-0 SuperSport United.

As usual in the new normal, there was a moment of silence for all lives lost to the COVID19 pandemic. Also, some acknowledgement for the workers in the health sector.

In the 15th minute SuperSport looked more organized and kept on searching for another goal with some brilliant built-up.

In the 20th minute Rasebotja received a caution in what looked like a clean tackle.

The two crosstown rivals displayed some good football as Sundowns levelled matters (1-1) in the 22nd minute from Thando Buthelezi‘s header.

In the 24th Appollis nearly scored after a brilliant cross on the left from Thapelo Maseko as the ball went across the goal mouth.

Sundowns made their first substitution in the 26th minute as Thato Matli came on for Oageng Phiri after a challenge from Rasebotja.

In the 33rd minute Keenan Bezuidenhout’s long range effort on the left sailed over as he was aiming to score.

The halftime score was 1-1.

In the 60th minute United won a corner kick as Thapelo Maseko’s header went over the post.

Matsatsantsa made their first substitution in the 61st minute as Abram Mashele came off the bench for Ryan Manning.

In the 62nd minute SuperSport’s Maziko completed his brace as he combined well with Appollis again to find a winner in the capital city derby, a replica of the first goal after a brilliant pass from Bezuidenhout this time around.

Matsatsantsa’s second substitution came in the 72nd minute as Bezuidenhout made way for Kgodiso Sukati.

In the 73rd minute Sundowns made a double substitution as they were pushing to level matters.

In the 77th minute United captain got cautioned after handling the ball and Sundowns were awarded a freekick that came off the crossbar from the boot of Nxumalo.

With only 10 minutes remaining, United conceded an indirect freekick as Mashele played a back-pass that didn’t look deliberate to his goalkeeper Samkelo Xulu and he innocently caught the ball.

Matsatsantsa assembled a huge wall as they brilliantly dealt with the set-piece.

In the last four minutes of the match United were under tremendous pressure by committing too many fouls as Sundowns kept on fighting to find an equalizer.

In the 88th minute Appoliss’ long range effort drifted away from goals after he cleverly noticed that the Sundowns keeper was off his line.

The final score was 2-1 to SuperSport as Appollis won Man of the Match award.